Move to the text

Mt. Takakuma soaring in the Osumi Peninsula located the right side of Kagoshima is Yakushima, Takayama next to Mount Kirishima in Kagoshima.
On the highest peak, seven peaks more than 1,000 meters range, and the vertical course from the various quarters opens Mt. large spatula pattern of 1,237 meters above sea level (onogaradake).
It comes from what call "the spatula" of the Mt. large spatula pattern with the pattern (Gullah) in a meaning of "suzudake" in the hometown, and was covered before in suzudake in the whole area.
In addition, the ascetic practices of Buddhist monks were done in the old sacred mountain that called Mt. large spatula pattern the Mt. book in the hometown, and was admired equally with Mount Kirishima as Motoyama of shugendo.
When the Edo era began, the people crossed a member of a pilgrims' club, and takesan ri (bamboo May) became popular. Many stone small shrines are still left as the trace on each peak. I'm sorry, the Mt. wife located in the center of Mt. Takakuma was called take (*matake) in old days.
"I'm sorry," the etymology calls a "corner" "corner" "suma" in a dialect of here and, "I'm sorry," becomes by the pronunciation. It comes from that it is located in the corner (Sumi) of Kanoya, Tarumizu geographically. I'm sorry, the mountain pass of the foot is a mountain pass.
Because it is written down on the Mt. Takakuma map of Meiji 35 nen*zu with "Kumahara state forest", it is thought that Mt. Takakuma at the time was an unimaginable virgin forest. In addition, as a hawk opened a feather, the Takakuma mountain ranges to look up at from Nogata, Osaki-cho located of Motoyama northeast are expected, and the brave scene of "southwesterners of Kyushu" said to that I settled down in the mountains of Minamikyushu in the ancient times is reminded of.

I read the "bear" "dark circles" "*" "corner" with a bear, Sumi, the Y and it is the curvature of the bow, and a mountain and a river stand back and say a secret place and the topography of Mt. Takakuma turns like a bow and says the high mountain of the "sunrise zuru" place. There is a sunrise zuru place the pike of the arrow in a mountain rising to a great height.
It is thought that such place name was named by the Buddhism believer who learned the study of the continent. It is thought that the place name of Osumi comes from that the topography greatly bends like a bow equally.

Guidance of the mountains of the Osumi district 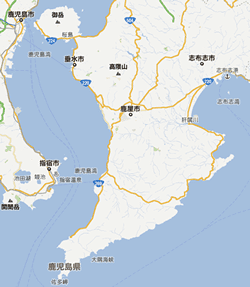